Did I ever tell you about our house? I can see our house now. A one and a half story set on a seventy-five by seventy-five foot lot. 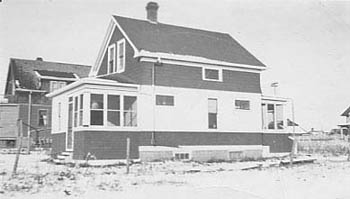 In the days before the depression, the yard was fenced with front and rear gates as well as a large car gate which allowed access to the extra long one car garage that never had a car in it as long as I can remember (it was always our play house).

The house itself had a front porch (screened) facing north, and a solid oak paneled front door leading into a small hall that contained two rows of coat hooks, a banister and stairs which led up to the three bedrooms.

The living room was separated from this entry area by another less elaborate door. The formal living room was where we spent most of our long winter evenings because the central coal burning furnace with it's two and a half foot steel floor grate was situated in the south east corner of the room. There was also a blue plush-covered sofa with matching chair, a piano, and a large console radio (Philco). The latest thing in home entertainment, it was powered by two batteries which somehow always seemed to go dead in the most exciting part or "The Green Hornet".

The room had a west facing window (small) and a big picture window (maybe four foot square) which faced north into the screened front porch where the arctic air lay quietly waiting to put an inch of ice crystals on the inside of the glass.

This nine foot square formal living room was Mother's pride and joy and she adorned it with special curtains, a hand-hooked rug (made out of discarded material) and two large pictures (genuine oil paintings) of elk in rut. Each picture was carefully hung from a picture railing which circled our formal living room.

These two beasts hung facing each other and filled the space between the picture window and front door for all my years of growing up. Mother often told us how when this unknown artist was discovered these beasts would be very valuable. It could have been worse. Just imagine what two moose would have looked like.

Below our living room was the basement, with concrete walls right down to the dirt floor on two sides, and half way down on the other two. A door off the dining room led to a small landing with shelves for blankets and linen storage, followed by a set of stairs leading to the basement floor.

Not all my friends had a real door with landing and stairs. A trap door and ladder was very common.

The basement proper was warmest in winter and coolest in summer, which meant all our garden produce (potatoes, carrots, turnips, parsnips, etc.) had a short shelf life and required our constant attention. Another task which I did not really enjoy.

Here's how it worked. The sacks of potatoes had to be opened often, each potato cleaned of sprouts and the rotten ones removed. The carrots and parsnips were buried in sand and had to be searched for rotten ones. This involved digging with the hands until you felt a slimy squish. This memorable task was not often well done.

The coal bin was about four by six feet. Built out of heavy lumber, it ran from floor to ceiling. The narrow door was propped shut with a two by four hooked under the handle and held by a stake driven into the dirt floor. Even at that I have seen it burst open with coal spewing out to crash and rattle against the big steel furnace.