The Principal and the Thundering Herd

Our school yard was huge as school yards go, since the town fathers foresaw a rapid and continuing population growth. The school building was a solid brick two story with the lower story set into the ground to the depth of the windows (what today we call a garden level). When entering our school from either front or rear door you found yourself on a landing, with eight foot stairs going up or down, in a split-level arrangement. When J. C. (which is what we called our principal John Charyk, but only behind his back) rang the dismissal bell every student in the four classrooms poured out and down both front and back stairs.

Old J. C. called us the thundering herd. To control this herd he would hide at the lower landing and nail the first two or three road running leaders of the thundering herd. Much like shooting into a herd of antelope. It was very effective, but had to be repeated about once every month to keep the stampeding herd under control. J. C's. punishment for the fleet-footed culprits which he thinned out of the herd was not corporal. The victim merely missed recess and had to fill one blackboard with the sentence "I will not run on the stairs." 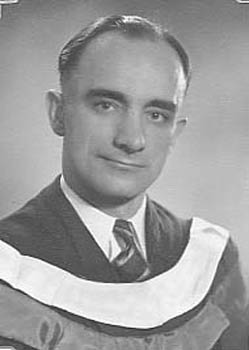 John Charyk was an excellent teacher and a fine principal as well, but by today's standards he was a tyrant. He wore the quietest pair of shoes I ever saw and he loved to hide behind doors, in halls or cloak rooms waiting for some unsuspecting victim. Any student who was in trouble was sent before J.C. for trial, sentence, and punishment. He seemed to mete this out with relish. His favorite trick when interviewing students that were sent to him was to carry the strap (a foot long piece of belting one and one half inches wide) and almost unconsciously slap it against his leg, as if he could hardly wait to get down to work with it. This procedure was guaranteed to chill the blood of every student sent before him (except Gus of course). Preliminaries no longer threatened Gus in any way.

I stood before him several times quaking in my shoes, and I know that the only thing that saved me from the strap was the well known fact that Eva Cooley (my mother) was a woman to be reckoned with if any of her three sons were harmed.

I did not realize this about my mother at the time, but I did know that poor Gus got some most horrible beatings with less provocation than some of the things I had done.